The sermon this morning began with a reference to a book called Building the Resilient Community and is about the lost boys of the Sudan. Libby said at the porch meeting today that she loved the great stories the preacher told, and we all thoroughly agreed! He told about the boys who ran away during the violence in Sudan, and were in the jungle with no weapons, no shoes, no resources of any kind, and who mostly survived. Without their shoes, their feet bled as they walked, which enabled the lions to easily track them. With no weapons of any kind, you’d think the lions would make short work of those boys, but that’s not what happened. The older boys locked arms with each other, forming a large circle facing outward, with the younger boys inside the circle. Those who had a stick or anything that might appear to be menacing would hold it high. When a lion would approach, the size of the boys together appeared large and gave the lion pause, and the lion would usually make some noise at the circle and turn around and go off to hunt something smaller. Those boys, even when brought back to the United States, maintained that sense of care and grace and compassion with one another that was powerfully moving to all who met them. Their circle of care and grace is what we are all called to provide for one another, and it doesn’t require dire circumstances like those children experienced. It just requires the will to be aware of each others’ needs and to be present.

At the porch meeting after lunch, we talked about what was interesting or moving for us at that service. For me, I love how the preacher begins his sermons:

May the words of my lips
the meditations of my heart
the music of our voices and our instruments
the visual arts of our hands
and the motions of our bodies
be acceptable to you, Lord

Noah enjoyed how the gospel songs were woven in throughout the worship. Andrew said he really liked how the hymns are begun in unison, then SABT, then children, men, women, unison, etc. Mary raved about the children’s choir director, saying she’s the best she’s seen at Montreat in a long time.

We also remembered Mary’s step-mother, Brenda, who was here two years ago when Eren was a baby. At that time she seemed to be miraculously improved from her illness. All the kids loved getting to know her. She passed away last year during the Montreat conference. She was back with us in a way this morning, when we sang a hymn that was sung at her funeral last year. God’s fingerprints are all over this place. 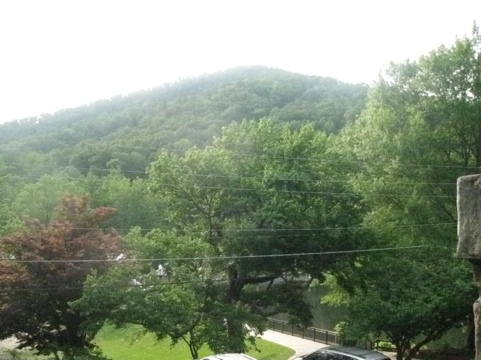