“We made it to Montreat and it was an easy and uneventful trip.”

True story: I was on the bus last evening drafting the first blog post for the trip. That was as far as I had gotten when things suddenly got, well, eventful.

The other bus called us. They had smoke coming from out of their hood and had to pull over asap! We assessed pretty quickly that it was the transmission, and that the bus would have to be towed. We moved all of the luggage from the van into the working bus (the new one), and had to pack the passengers in pretty tightly – bags under feet, in laps, etc. Then we moved all the passengers from the broken-down bus into the van. It was… tight. It’s a good thing we all like each other so much, because we were in there like sardines in a can.

When we got to the Montreat gates, the bus parked and the van went on ahead to find the lodge, and to assess the possibility of the bus fitting on the narrow streets. Once we found the house, in the pitch black with only our iPhone flashlights, we found rock steps from the street to the front of the lodge, and a parking area in the back. The parking pad was at the bottom of a steep driveway going down and angled to the left. We got out and looked at it and debated, but to be honest it was the only way to turn the van around, and we weren’t about to back up on those roads! So with lots and lots of help, I drove the van down the driveway with the goal of inching it up and back until we could back into the parking pad. Mary and Amy were guiding me in with shouts of “slowly!” and “cut it hard to the right!” We got far enough down to get everyone off the bus. I stayed in the driver’s seat with my seatbelt on, and remember thinking this is what it felt like when you’re on a ride at the fair and it stops to unload, and you’re just hanging there at a weird angle. I was at a weird and not at all natural angle in that position. The left side of the van was appreciably lower than the right. Once everyone was out, they again guided me back, and after some sliding sideways on mud and gravel, all four wheels were once again anchored on solid surface and we all breathed a sigh of relief.

I gave up the driver’s seat at that point because I hurt my back sitting at that angle for so long. I understand that Mary struggled to get back up the driveway, but with some creativity she made it up to the street, and went to get the few people left and all the luggage. She parked on the street in front of the house, avoiding the back driveway like the plague.

This morning, in the light of day, we see that there is a driveway at the front of the house that is steep but entirely paved, and it leads to a parking area that should accommodate the van pretty well. Sigh.

We are all so thankful to be here, safe and sound. We got some great pictures of the trip before all of this that will be posted shortly. 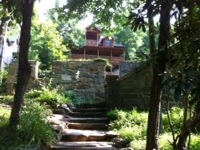 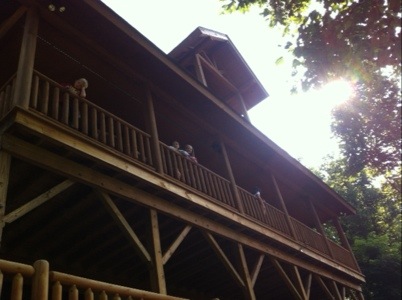 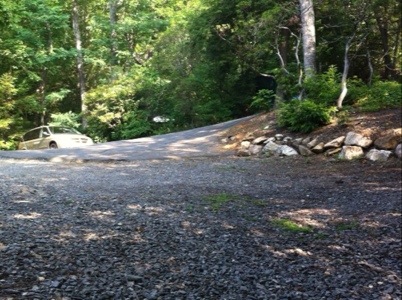 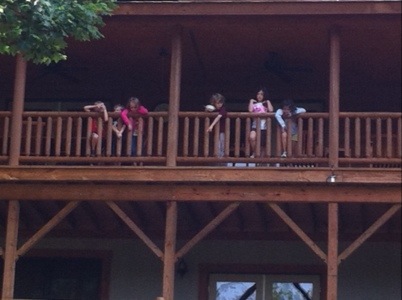