We’re on the charter bus, on our way home. I actually found a seat on the bus that had a table of sorts, and so I’m able to put my iPad on that, and can pretty easily type with my keyboard on my lap. Anne took a picture of me blogging last night. Lest you think I always wear makeup and lipstick here, let me just say that she took that right before the final concert, when we all dress up! 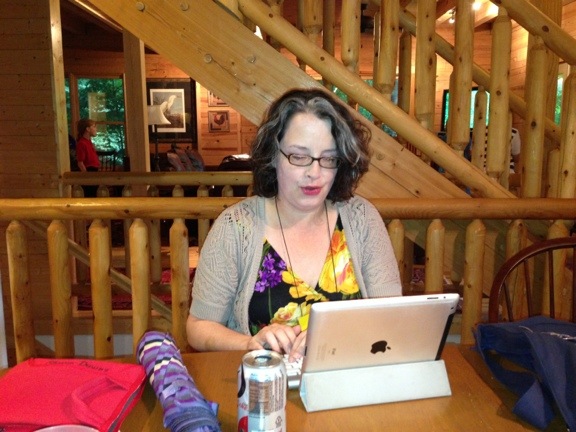 The technology changes at Montreat in the last few years has just been amazing. When I started coming four years ago, cell phones didn’t work except for one or two spots on campus, and then it was iffy. Compare that to last night, when I pulled up FaceTime so Ben could see Harrison and the other middlers sing. He was in a restaurant in Little Rock and couldn’t hear very well, but could see. I enjoyed getting to show him the size of the auditorium, and the size of the audience, as well as the very cool choreography the middler choir director taught.

The schedule yesterday was really weird, as it always is on Friday of the conference. They have to shuffle class schedules around so that everyone who performs in the Friday night concert can rehearse in Anderson Auditorium in the morning, and again in the afternoon. At one point I had about 30 minutes free while the middlers were in bells. I went to an area where I could stand in the icy-cold waters of Lake Susan’s tributary and where I was surrounded by trees and rocks and nature. There was nobody around, and so I sang through my recent repertoire, including a solo I’m singing at church at 8:30 in the morning. I’ve found time the last three years to do this. It’s always one of the top things I look forward to doing, right up there with seeing Anderson Auditorium at the first worship service to check out the banners and decorations, and that first bite of Moose Tracks ice cream from Huckleberry.

Here are the children before the morning rehearsal in Anderson began. 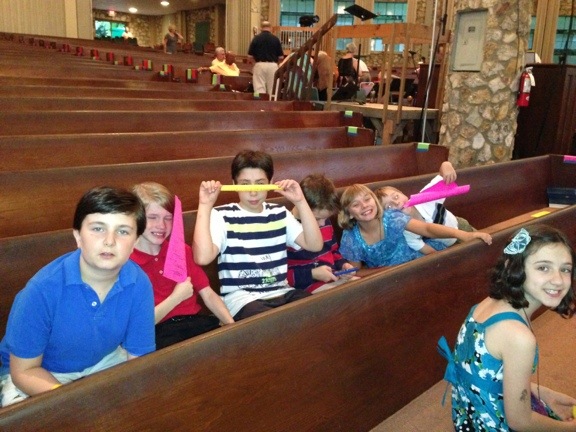 Clara and James on the deck. 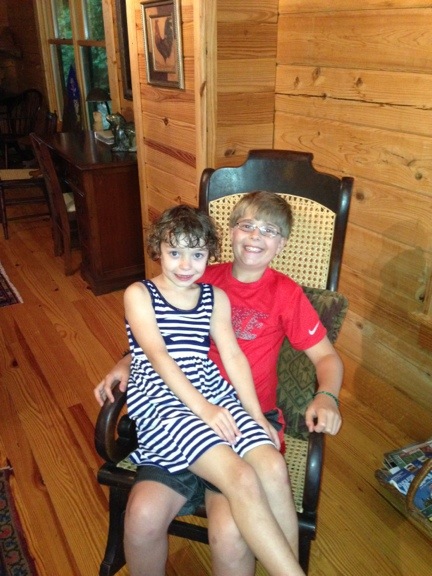 Alex and Mac, Spencer and Donovan, Ozgan, Jamie and Thea, and Reilly ringing in the Friday morning service. Emma and her family left early Friday to make it to a wedding, which is why she’s not pictured. 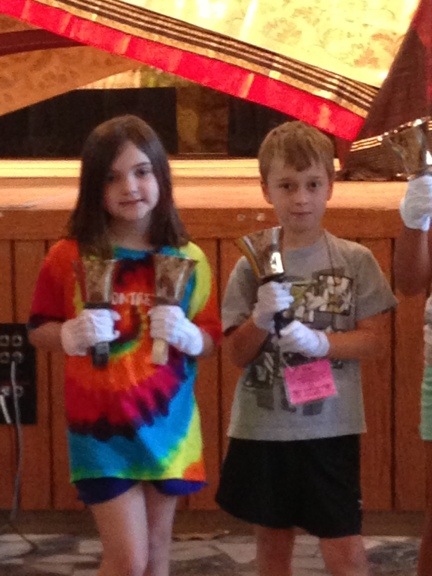 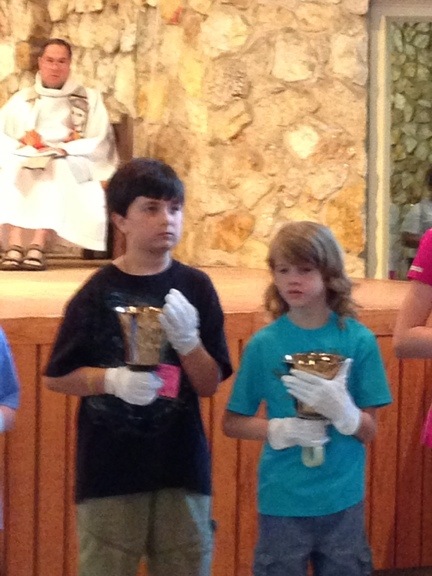 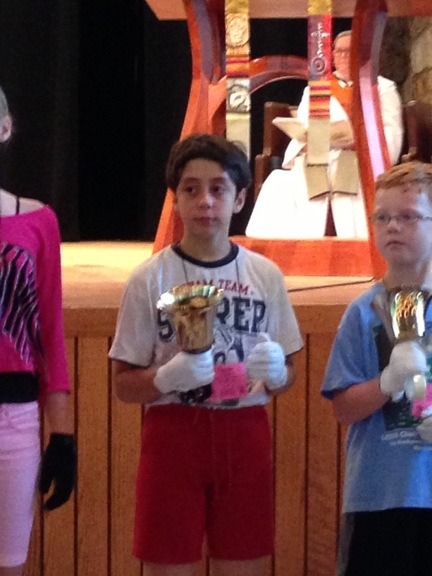 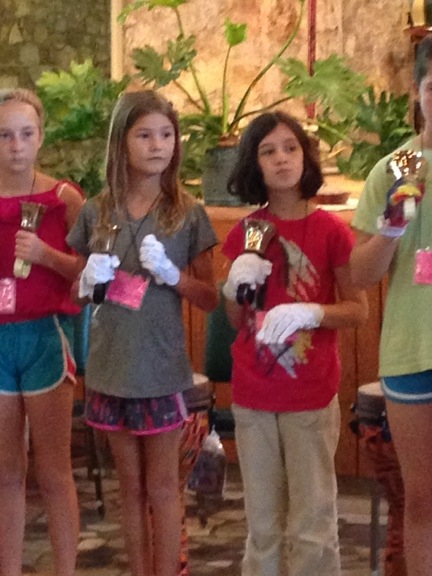 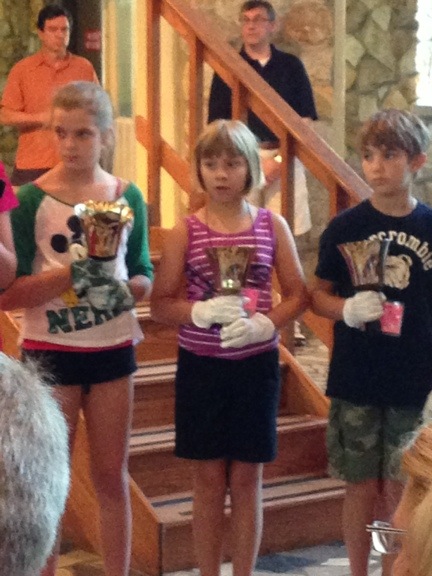 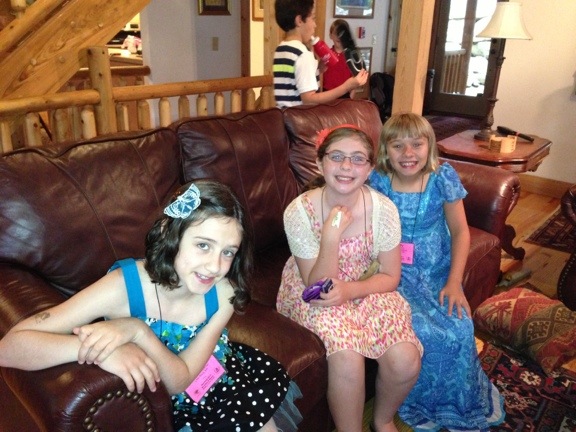 This is a picture taken last night before the concert – four of the chaperones doing their thing at the dining room table. By the way, this is the table where the adults typically eat. The children, middlers and senior high kids typically eat one one of the decks. It’s win/win: The kids can be a bit more loud and rowdy, and it’s also easier to clean up – just sweep any stray bits of food off the deck. 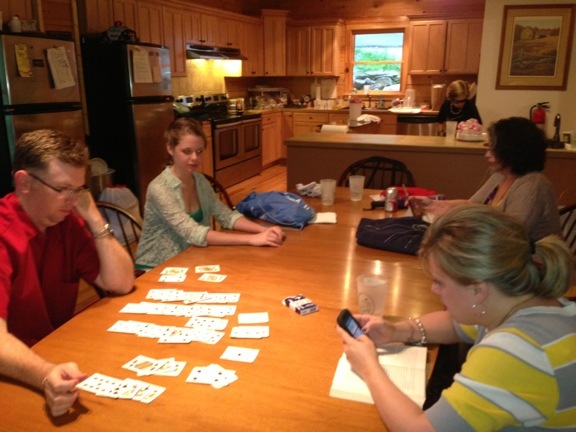 Before the concert I did Elizabeth’s hair. This is apropos of nothing – I just wanted to show off my handiwork. 🙂 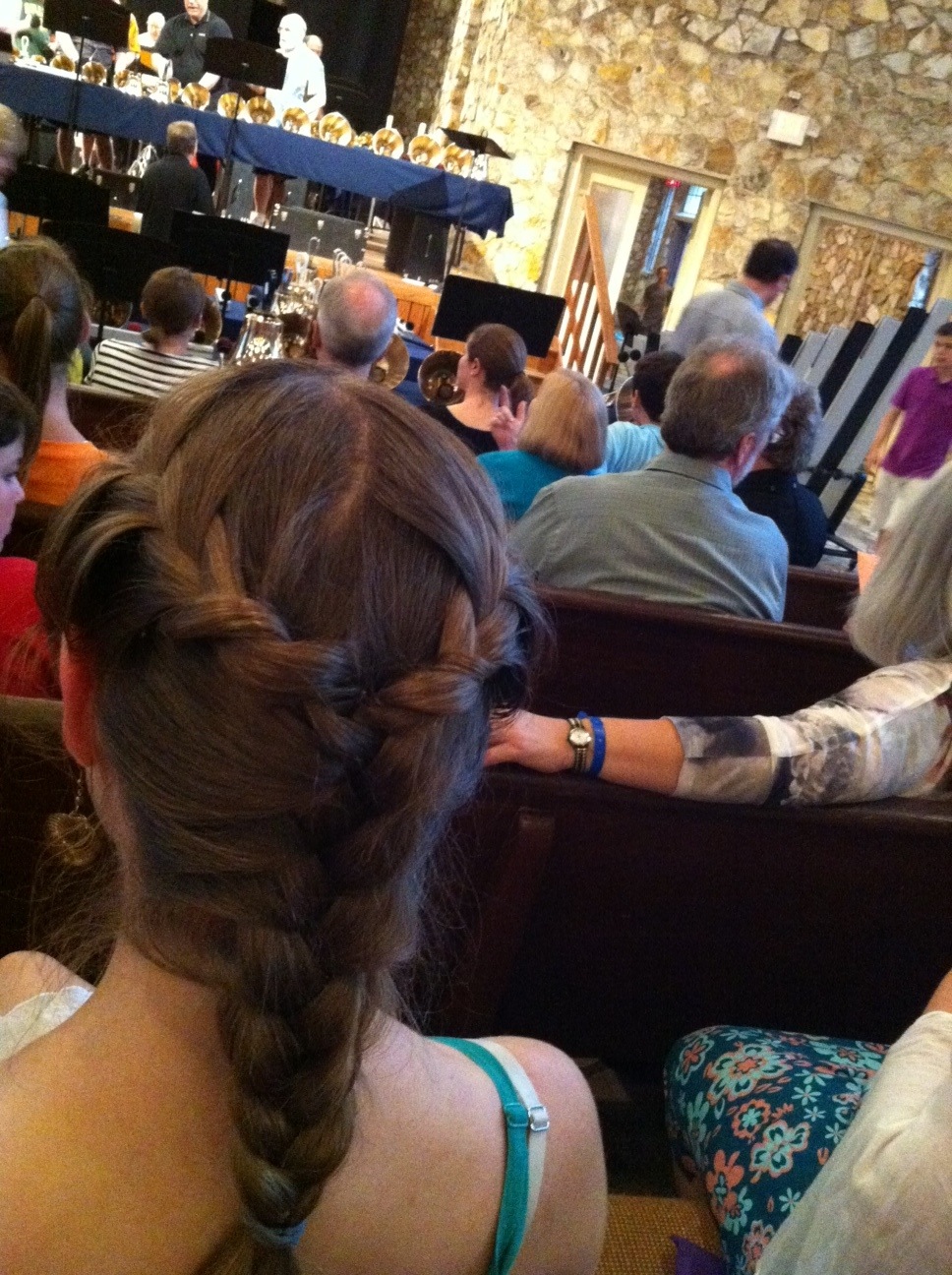 It was difficult to get good pictures at the concert last night. Each choir is positioned in a different place in Anderson, and some were quite far from where we sat. The photos are grainy, but are the best we could get.

If you look carefully you’ll see Emma toward the left (fifth from the left). She is singing with the senior high choir. We weren’t able to get pics of any of the others in that group. 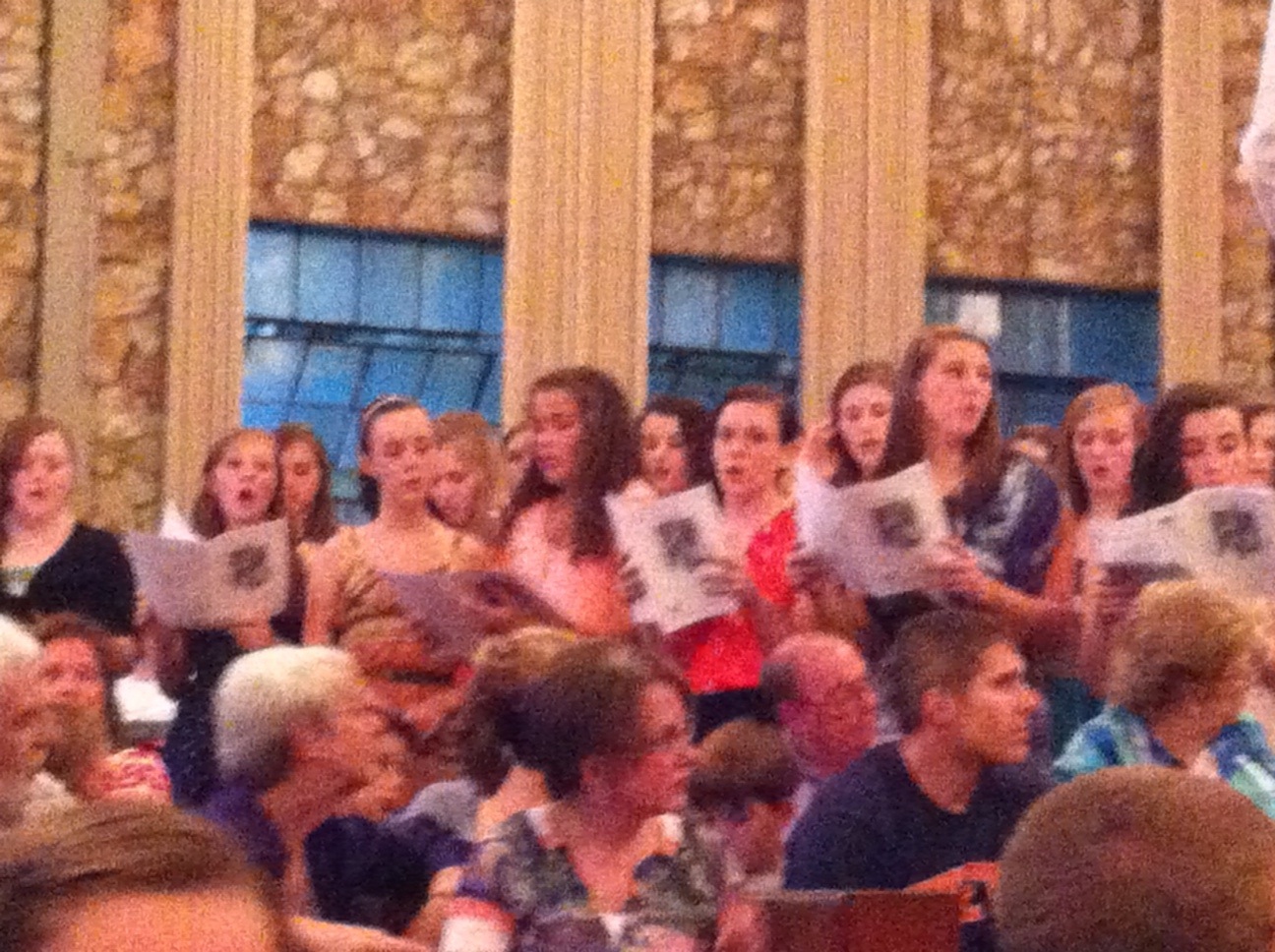 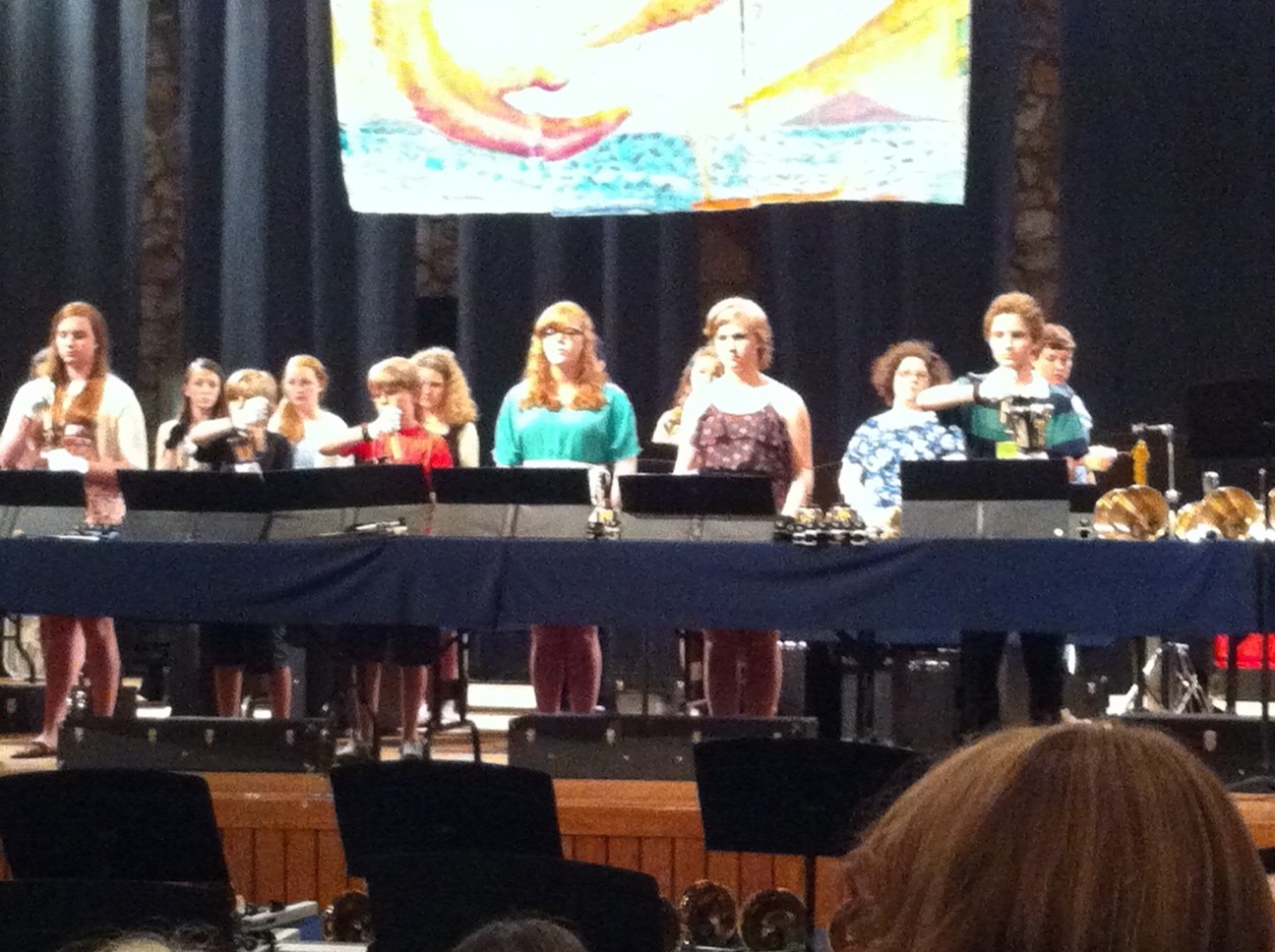 Bruce and Noah ringing in the Advanced Bells at the concert. 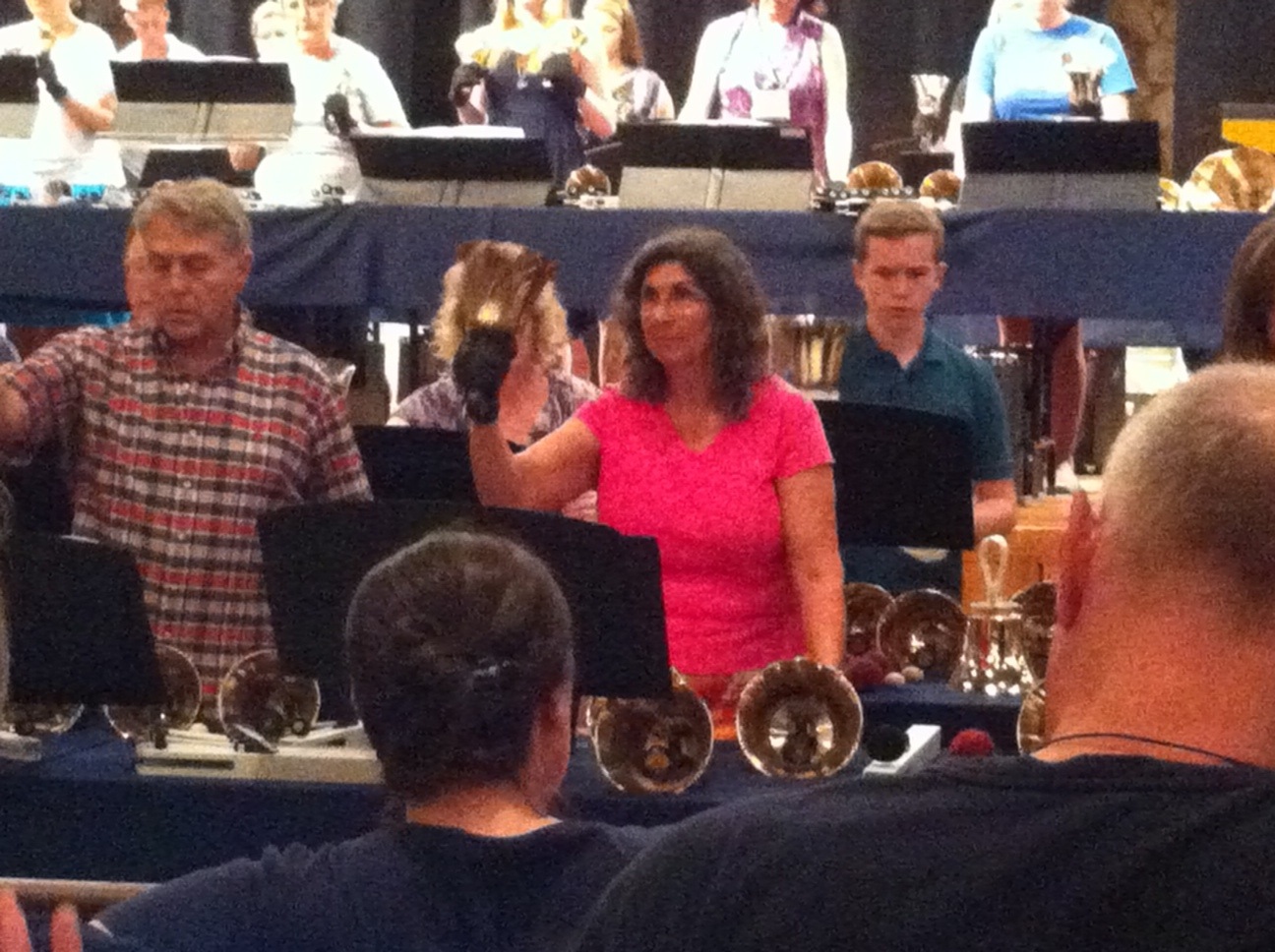 William ringing, third from the right, in Intermediate Adult Bells at the concert. 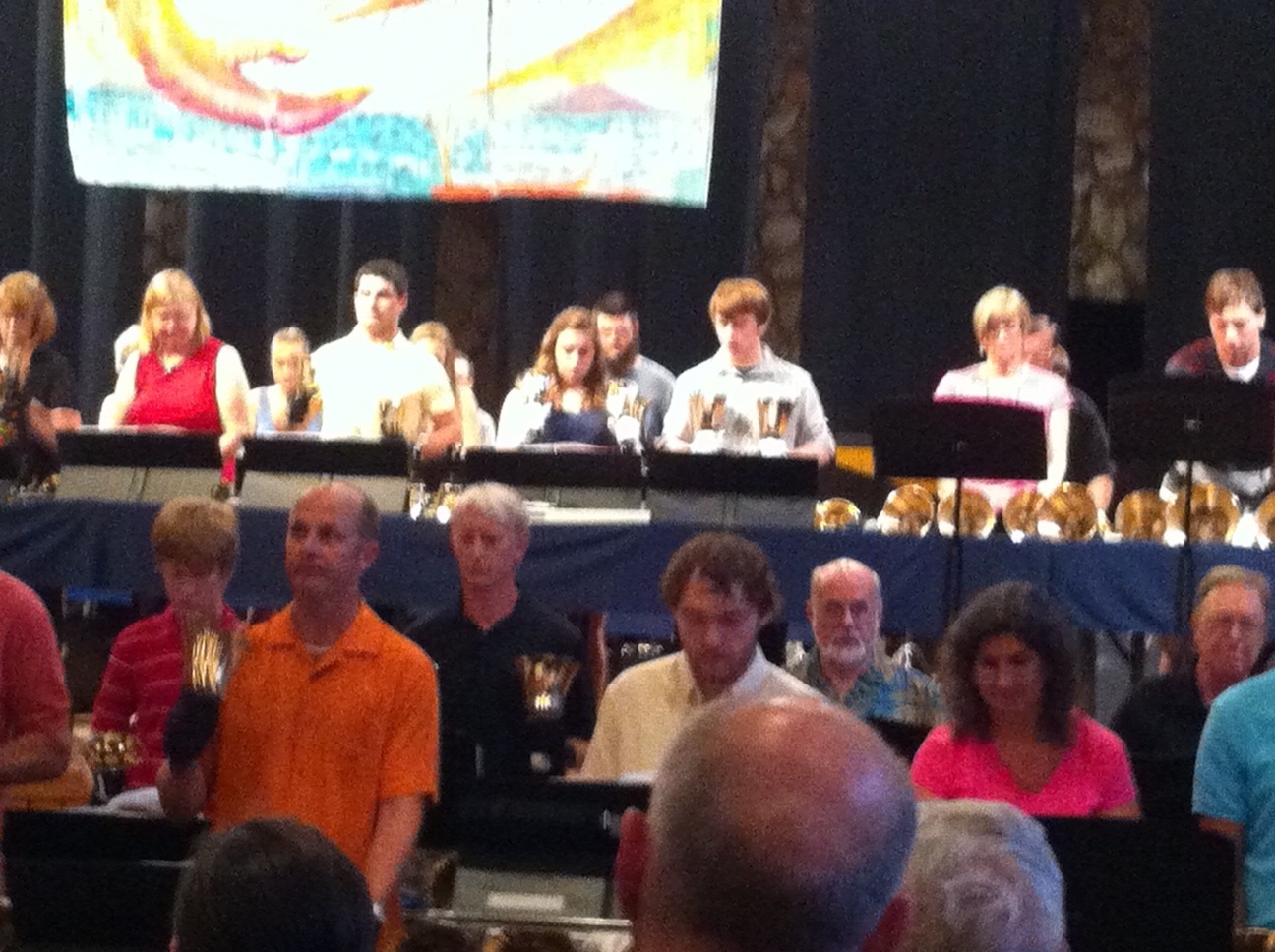 Harrison singing and doing hand motions to their first song at the concert. For this piece, the Middlers were in a line mid-way back on the left, around the front, to the mid-way mark on the right. With the hand motions, it was quite effective! 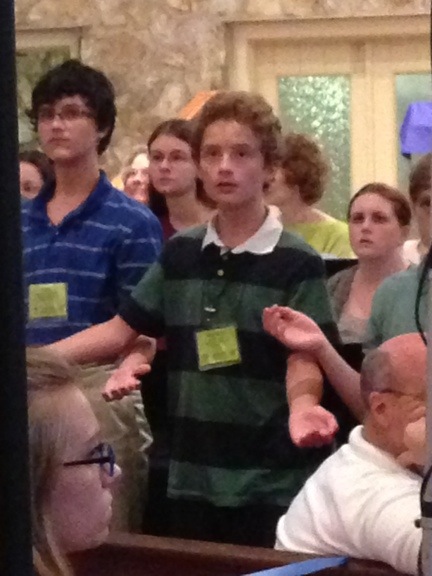 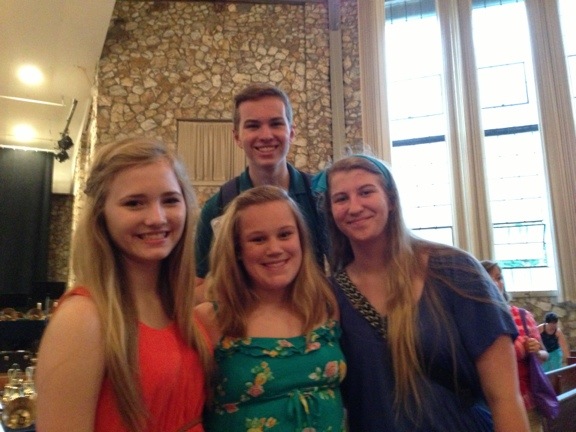 Chilling at Huckleberry after the concert Friday night. This is a long-standing tradition, that Mary treats everyone to ice cream after the final concert. 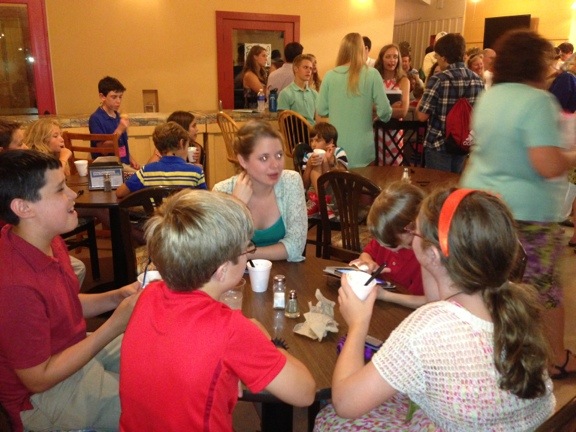 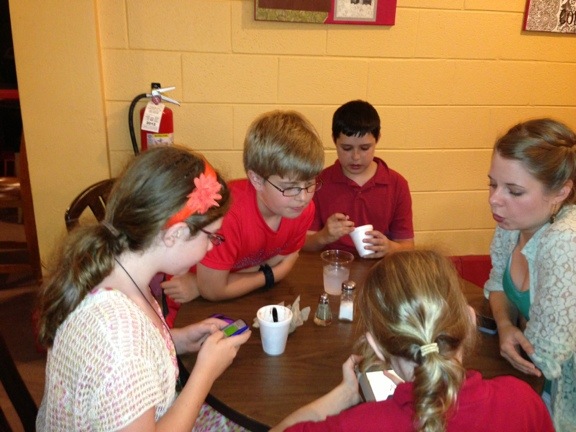 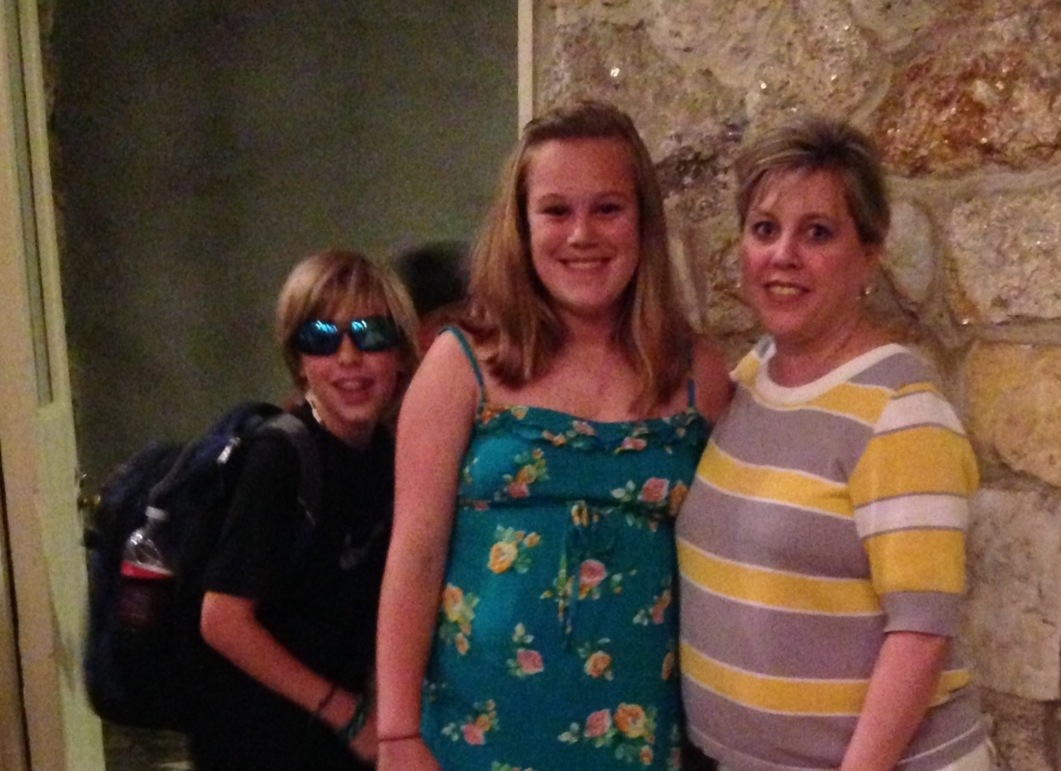 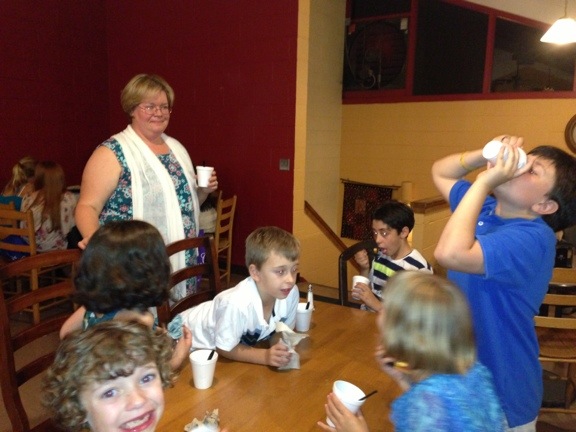 The other tradition is that everyone can stay up as long as they want on Friday night. The only rule was that you can’t wake anyone who wants to be sleeping. We stayed up til midnight playing rummy, and introduced Mary to Macklemore and Ryan Lewis music. Same Love got a thumbs up. I don’t think she cared for Thrift Shop!

We had perhaps the best combination of chaperones we’ve ever had this year. Staying at the lodge means a lot more work for the adults (preparing meals, etc.), but with the right people, it goes really smoothly and isn’t too much to handle. Having the kids help with meal clean-up was a huge help, and maybe they’ll translate that to their kitchens at home! One can hope. 🙂

We really enjoyed all the kids this year. Thanks to the parents for making this investment in their development by sharing them with us for a week at Montreat! They make life-long memories here and grow as musicians and as people.

My son and I have posed for the same picture at Montreat the last three years (didn’t think to do it his first year). For me it’s a visual reminder of what Montreat does for him and all the kids who come – it guides them on their journey from childhood to adulthood. And because their musical and spiritual education began so early, they will have the tools to meet and even surpass us as singers, ringers, and church leaders. They’re already getting taller than us! 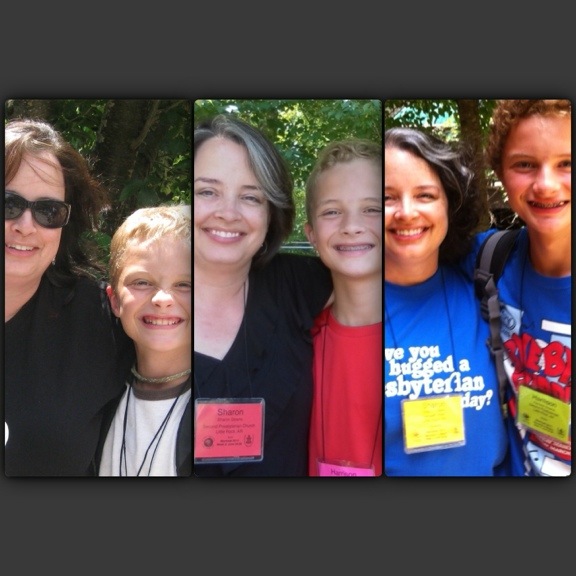 – Sharon, the ‘ready to sleep in my own bed’ blogger