The sermon Wednesday was especially good. The parts about disability resonated with me, since that’s my field. The sermon seems to have clicked with everyone else too, because it has come up in conversation several times over the last 24 hours. I recorded it so I could listen to it later, being afraid I’d miss the main points. I started to try to summarize it, but then decided to type it out almost verbatim, to keep from shortchanging you, dear reader. I found Bradley after the sermon today and asked if he minded me sharing this on our blog, and he said he was happy to have it shared.

I failed Christianity 101. That’s the basic level, a beginner’s class. It happened when I walked parts of the Camino Santiago, which is an ancient pilgrimage route that starts on one end of Spain and ends at Santiago de Comostella, the place where the bones of St. James are buried. When I began that walk with 12 other pilgrims, I imagined our time together would be filled with holy conversation and spiritual insight and prayer. Well I quickly realized that the main topic of conversation was feet. They ached, they blistered, they Charleyhorsed, and by the end of the day, oh, how they stank. One in our group had serious blisters. Whenever we would stop for coffee in some quaint little Spanish village, she would pull off her shoes, peel off her socks, and examine the day’s damage. This often happened at the table, and usually involved a needle to pop the blisters (everyone groans). See? You’re with me. I couldn’t stand it. I didn’t want to sit at the same table. I didn’t want to hear about that every day. I didn’t want to see blood and that juice. I was there for the spirit, not juice. But I knew Jesus would want me to pay attention to her feet. He would have washed them, annointed them with salve, and told me that paying attention to her feet was the same as loving him. This is why I’m so impressed with Thomas. Far from being a doubter or an example of weakness or the symbol for intellectual reserve, I actually think he’s bold because he wants to touch the wounds of Jesus. He wants to not only see the hole in his hands, he wants to put his finger in it. You should try Googling ‘Thomas’ and click images to see all the paintings of this. If you’re in fifth and sixth grade, you’ll love this because they are really gross! Because the wound in Jesus’ side was open, and there is Thomas with his hand up to the knuckle in Jesus’ side. Jesus’ resurrected body is still wounded.

Wouldn’t you think the heavenly body would be without its disability. No, in the new Heaven, Jesus is still the crucified one. In fact, the only way to know if the resurrection was a real thing is to come close to the wounds that are created by suffering and death. I’m not sure I understand that. It sort of goes against the grain. I prefer to imagine a resurrection in which all signs of suffering were wiped away. I’d rather have a superhero body for eternity – endless praise to the Savior around the throne with six-pack abs and a full head of hair – that’s Easter! That would probably be Easter in the new Superman movie – perfect bodies and muscles – that’s the ideal, as if being raised and made new was going through a kind of cosmic plastic surgery. That is not the picture we get in the gospels about resurrection. The living Jesus is recognized by his wounds. Life with God and brokenness are bound together in some mysterious way. He quoted a theologian, Nancy East, who lived with a congenital bone defect. She was clear that the resurrected body wouldn’t be perfect. The perfect body she felt was a construct made up by advertising, or by those in the ‘temporarily abled’ category. For her, she believed that her disability would find its way into heaven with her, because it was part of who she was. Just like Jesus cannot be the living Jesus without the evidence of his suffering, she felt she couldn’t be Nancy without her disability. The difference is that in heaven it would not cause pain or separate her from the full life with God and the communion of saints. She said her disability would be transformed, not erased. For her that was an important distinction.

There is an African language where instead of praying “John is sick,” they say “we are sick in John.” That makes prayer a risky place that’s not all platitudes and fancy words. Because like Thomas, not content just to talk about resurrection, prayer invites us to come alive by touching life in the same way that Jesus did. Certainly God hears our deepest lament and our deepest desires for suffering to be taken away. But maybe our most profound prayer is that not that we are taken out of suffering, but transformed and resurrected in the midst of it.

Bishop Gene Robinson says, “Sometimes God calms the storm. But other time God lets the storm rage and calms the child.” That’s the mystery of the Gospel, that Jesus chooses not to pass the cup, but to trust that God’s will is done even in suffering and death, and that in dying something new will occur. I don’t know how that works. I prefer to avoid the pain than lean into it. It’s not a logical, natural thing for us to do. But the promise is that suffering will not ever have the last word. Even if they make blisters and scars. Life has the last word. God always has the last word.

I had a spiritual director once who through conversations would lead me and try to help me understand the deep place of longing and loneliness and sadness in myself as the place that is connecting to God’s loneliness and sadness. I never wanted to get close to it because I was afraid I would fall in. You know, start crying and not be able to start. But she would lead me to that place and say, “Just stand at the edge of it.” When I felt I was there she said, “You won’t fall in.” It reminded me of my father on vacation to the Grand Canyon, and I was afraid to get close to the edge. He said, “I’ll hold you. Don’t be afraid.” That’s what we discover in the depth of human suffering, even in the deepest places of our own emptiness. Christ is right there in the midst of suffering.

Nancy East went on and talked about her scars. In her lifetime she’d had many surgeries to try to fix the bone defect. Her body was covered with scars and she was afraid it would frighten her daughter. So they would lay in bed and Nancy would tell her little girl that her body had train tracks that could take them to amazing places. They would draw their fingers on the scars and pretend they were taking fabulous trips around the world. Nancy would say, “Where do you want to go tonight?” and they would talk about the beautiful things they would see, the interesting people they would meet, all that they would learn. Her scars became the site of a new world. That world was no less real than the one they lived in every day.

That, too, seems like what we do in prayer. It’s the place where we imagine and name the worlds that are filled with beautiful and amazing things. Where we dream of societies that are structured by compassion and mercy, rather than greed and power. A place where we name out loud our hope that the wolf can lie down with the lamb, or at least Republicans next to Democrats. It’s also the place where we stand together despite our differences. Some of us today are celebrating that the Defense of Marriage Act has been struck down. Others of us are deeply concerned about the direction of our country, but all of us stand together with God in prayer, and trace the contours of the world that has sparkling water and food enough for all. Where no one labors in vain and everyone has a home, and there is enough medical care to live to be 100, like Isaiah dreamed. A place where all the women are strong, the men are good looking, and the children are above-average.

Yet we don’t simply imagine it. We name them out loud so we can take them into our own hands and let our prayer shape our life. They become real in the ways that we speak with one another. The ways we knock down barriers into justice. The ways we approach abuse or addiction. We carry the new Heaven in these bodies, as disabled as they are. The new Heaven isn’t just in our prayers, it’s in this gathered body, this scarred and wounded, broken and divided body. God’s very reign of peace and justice is a living thing that can be touched and tasted and trusted by the whole world.

In just a moment you will see it with our own eyes, lifted up, God’s dream, our dream, Christ’s body, broken and shared. Christianity 101.

With so many things in the world dividing us – war, cultures, social issues – I cling to Bradley’s words about prayer being the place where we stand together despite our differences. Wolf and lamb, Republican and Democrat. Christianity 101. 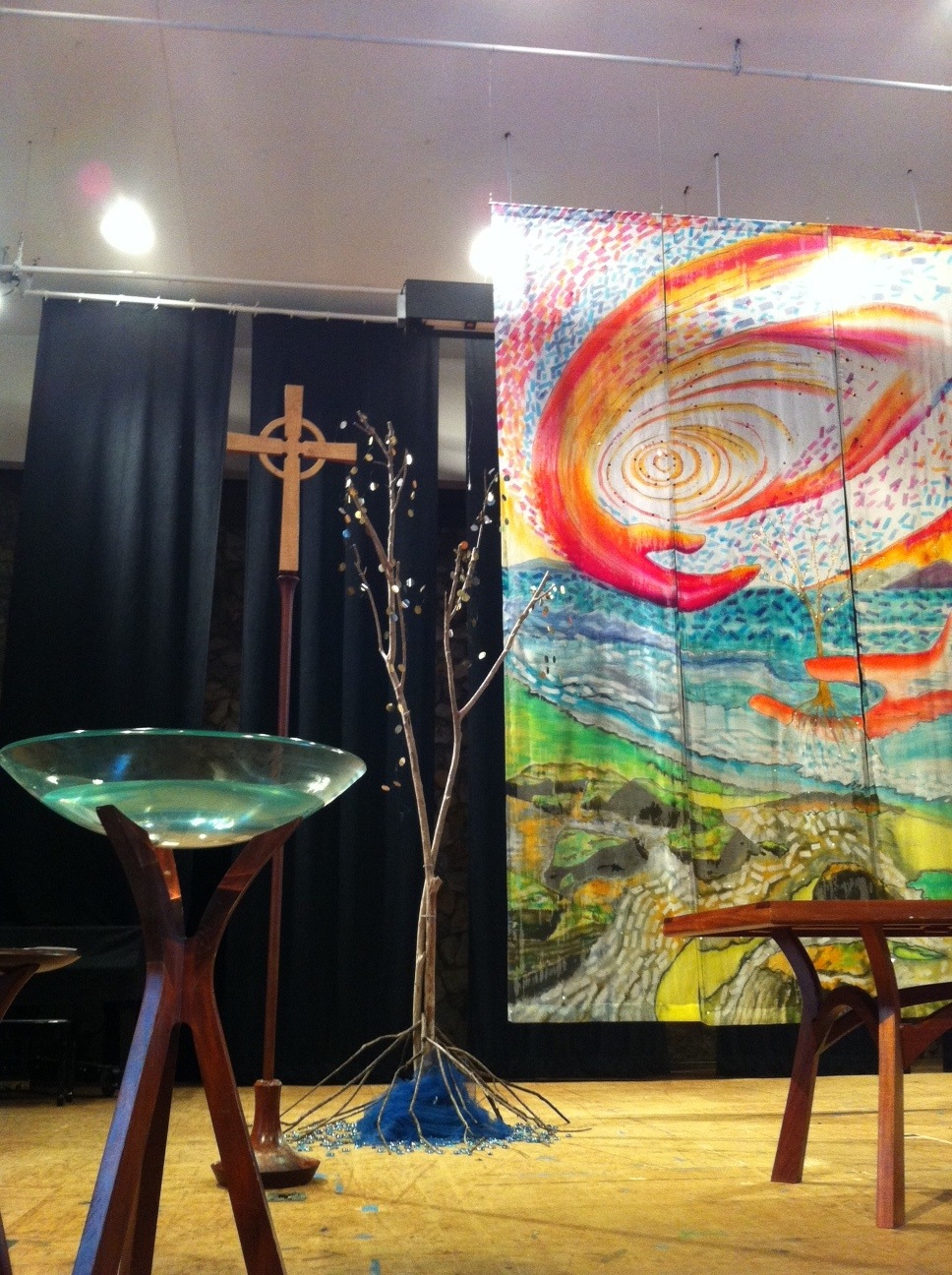 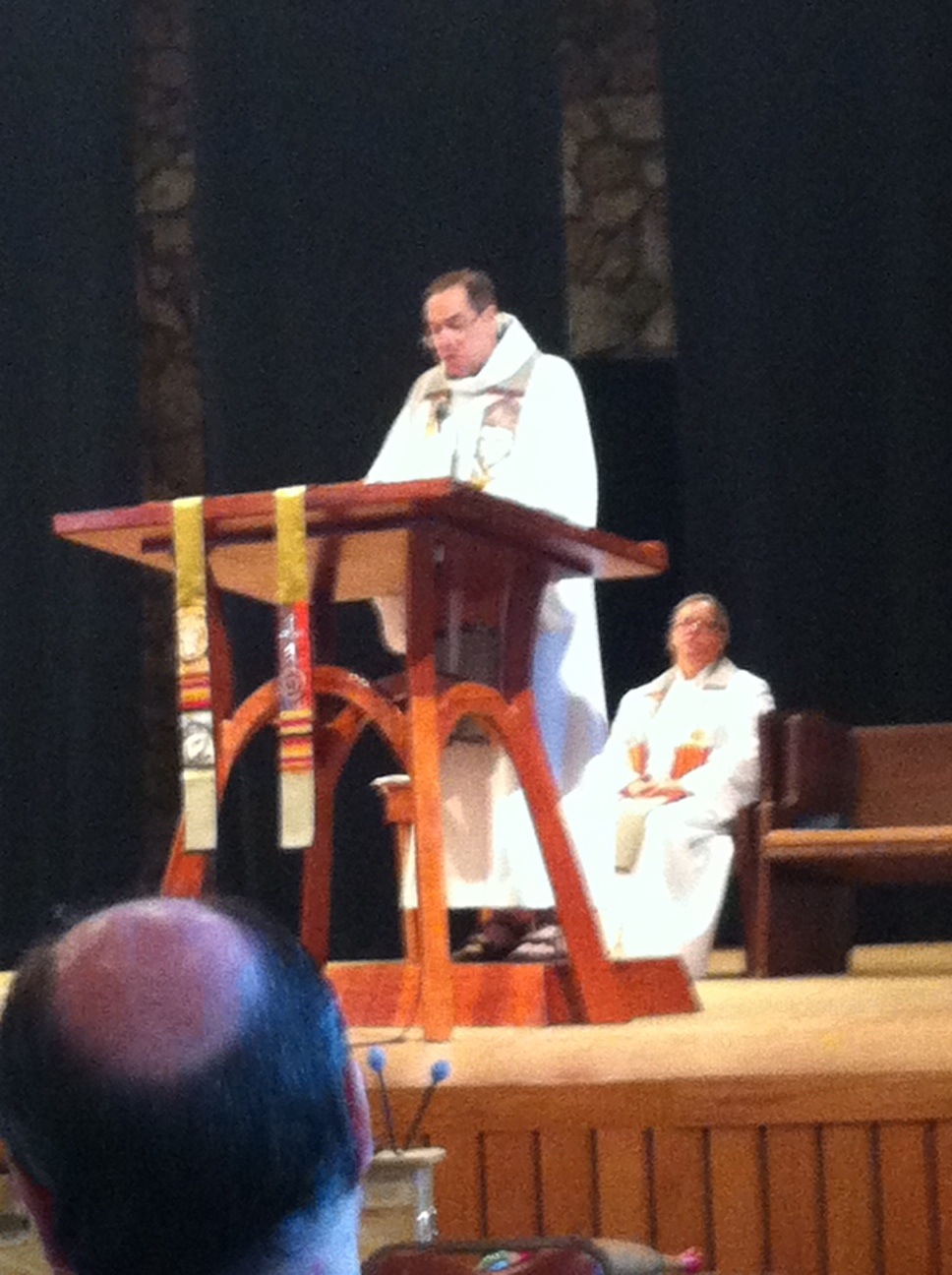